Since the Jaws movie went viral globally, shark movies have received much popularity among people who like suspense and mystery stories. I hope this Scariest Shark Movies list will make your summer. 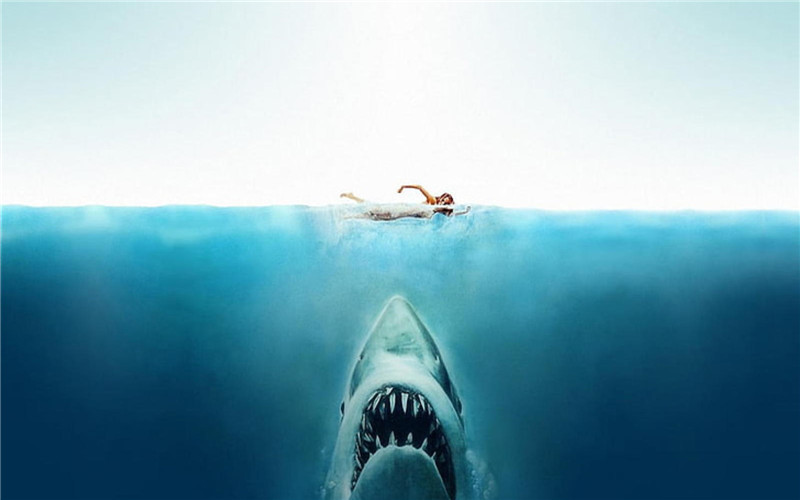 Imagine on sunny days on the beaches: a deadly animal is hiding under the deep ocean, waiting to hunt people who dare to get close to it. And the visitors who should be enjoying their holidays now have to take all means to protect themselves in case of becoming the shark’s food. Such a plot is scary even when we think about it, but it is also thrilling in an entertaining way.

The Jaw is a kind of old shark movie you may have watched a few times, and you probably want to know about other fantastic shark attack movies. Therefore, today I am writing this list to introduce you to some good ones and hope that you would like several of them. They are:

Megalodon is one of the old shark movies. Released in 2004, the movie is different from other shark attack movies by presenting the audience with a shark that is prehistoric and extremely dangerous. The story is not only thrilling but also exciting as the characters decide to face and fight against that monster directly.

Christen Giddings and his assistant go to interview Peter Brazier, the head of Nexecon Petroleum, who has been rejected by the environmental community from developing deep-sea oil field. While examining straws on the ocean floor, they stumble upon a prehistoric creature. One day, they take the elevator in the seabed observation, and the submarine pilot driving the submarine drilling oil falls into a beautiful cave. Inside is gorgeous anomaly scenery. However, a nightmare begins soon after. One night, they jointly take the elevator to the bottom of the sea, and at this moment, the monster appears. Elliot is distraught after his beloved girlfriend and companion have been killed by the monster shark. So he decides to use a bomb to kill this prehistoric shark. He drives the submarine down to the bottom of the sea to fight against the shark. 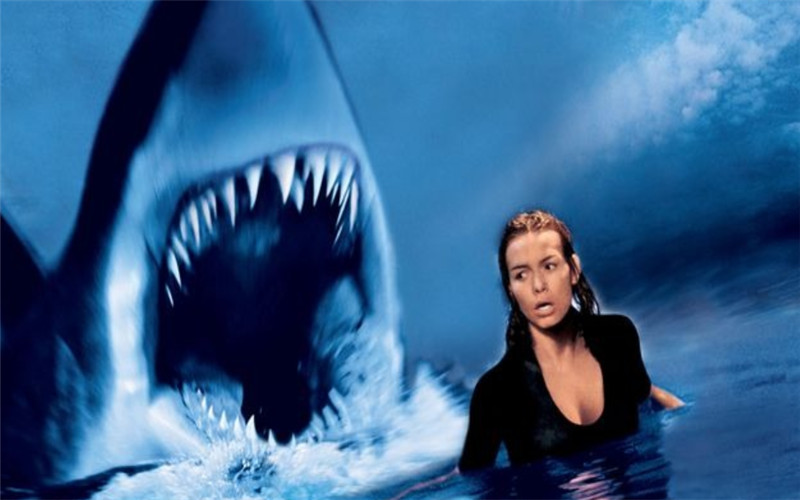 We know that sometimes hatred can make someone stronger and more determined but is this statement also correct for sharks? The 1999-released shark movie Deep Blue Sea tells the story of the revenge of a group of genetically-engineered sharks. This movie could be seen as one of the good shark movies as it combines horror and sci-fi elements in a balanced way.

Franklin, the owner of a Bio-pharmaceutical company, offers Dr. Susan McCallister a large amount of money to research an anti-Alzheimer's drug. Susan and her team take proteins from shark brains and inject them into dead human brain cells at a well-equipped undersea research center. To extract more of the sharks' brain protein, Susan also increases the size of the sharks' brains. This made the sharks, which are used as experimental animals, stronger and smarter. Shark expert Carter Blake finds the sharks are abnormal. He warns Susan, but she ignores it. Finally, in the last test, those sharks who have been used to do tests avenge themselves on humans. 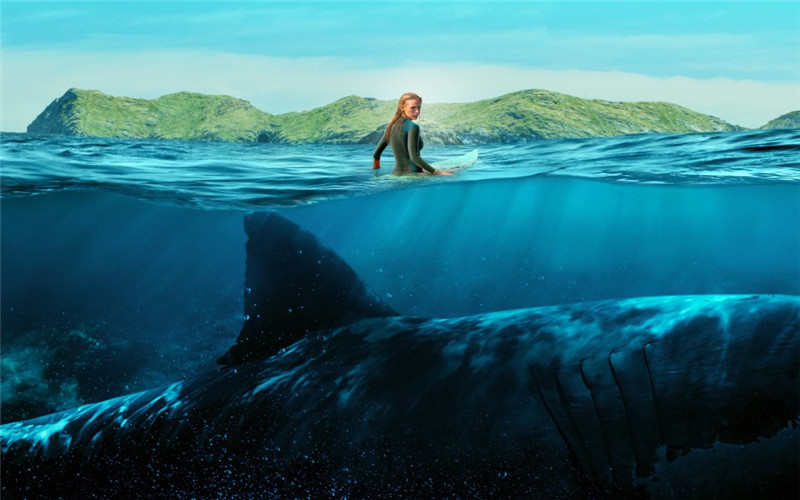 One of the scariest and the most desperate happenings is what is supposed to be a happy, and joyous experience suddenly turns into something horrible and unpredictable. The Shallows is a shark movie about this kind of experience.

In memory of her mother's late death, Nancy goes surfing on a beach that means so much to her mother. With quiet environment, clear water, warm sunshine and active water birds, Nancy deeply feels that this is how God bless her and her mother. While surfing, Nancy comes across the body of a whale attacked and killed by a shark, an ominous foretaste of the terrible experience she is about to face. The smell of the dead body attracts sharks from a distance, and Nancy is attacked by a shark which injures her thigh. She struggles to climb onto an outlying reef, where she waits for help desperately. To make matters worse, the reef will soon be submerged by the incoming tide, which means Nancy will be entirely in the shark's jaws, and there will be no escape for her. 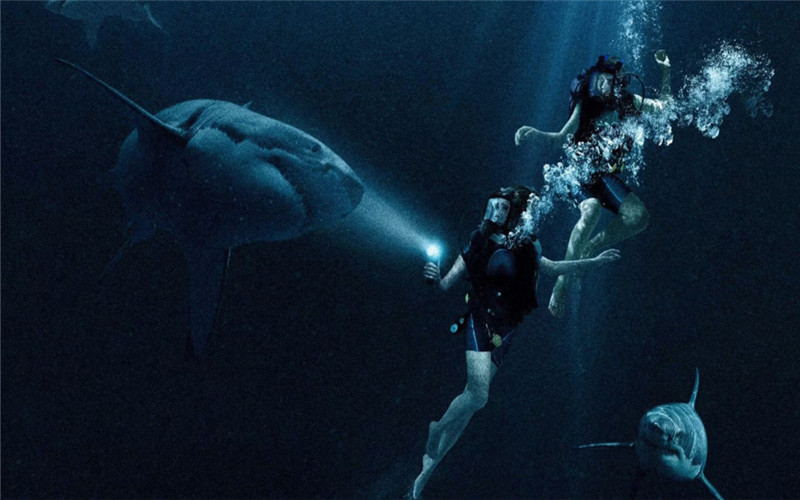 47 Meters Down is one of the shark attack movies. About two sisters attempt to escape from a shark. The two girls are Lisa and Kate, played by Mandy Moore and Claire Holt.

Two sisters, Lisa and Kate, are on holiday off the coast of Mexico. As they are snorkeling to watch a shark in a cage, the rope holding the cage breaks and the cage falls 47 meters to the bottom of the ocean. With a bit of oxygen, they have just an hour to escape and return to the beach. Meanwhile, great white sharks are also swimming around them. 47 meters deep, the sea floor is completely dark, and a flashlight can see only the outside of the cage. The workers' voices on the beach are sporadic, and the rescue team is nowhere to be seen. Both sisters are terrified. With a bit of oxygen left, they must make a choice now to stand a chance to survive. To avoid the shark and swim out of the water, the two sisters and the shark launch a battle that would determine life and death. 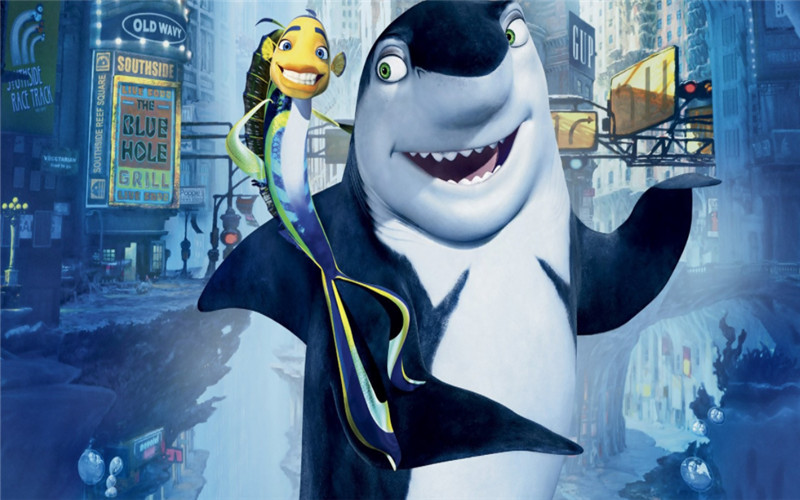 Typically, movies about sharks are too scary for children to watch. However, it doesn't mean that there is not a single one that our kids can enjoy. Shark Tale is an animation released in 2004 which is funny and children-friendly. Although the movie is not so scary, it shows that sharks are still frightening for many other species in the ocean world.

Deep in the ocean's South Reef, led by the great white shark Lino, the shark gang rampaged through. Other fish hate and fear them. They are always hoping that someone can stand out and do justice. Though Lino has an evil nature, he is devoted to his sons Frankie and Lenny. Unlike his violent father and brother, Lenny is kind-hearted, folksy and even vegetarian.

Oscar, a rambunctious shop clerk who owes money to his boss, is deeply in debt. Frankie ties him up, but Frankie is suddenly killed by an iron anchor. The boastful Oscar claims that he kills Frankie and indirectly befriends Lenny. However, this has drawn the ire of the shark gang. 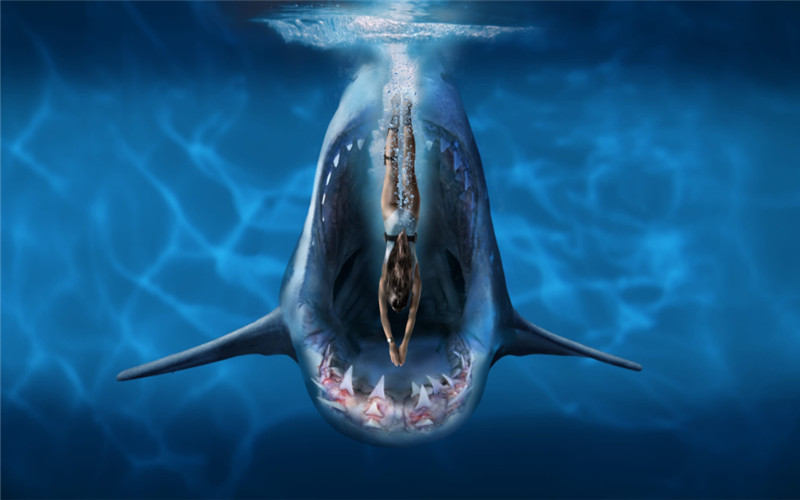 Deep Blue Sea 3 is a new shark movie released in 2020. Directed by John Pogue, the movie features many young actors and actresses, including Nathaniel Buzolic, Emerson Brooks, Alexander Bhat, Emma Collins, Reina Aoi and so on.

A group of explorers aboard ships in the Pacific intend to go deep under the ocean. While carrying out the task docking, the ship personnel find that unknown obstacles are close. So they immediately contact the coastal management, but the tragedy still occurs. Sharks eat a monitor. Six months later, the sharks reappear, unbeknownst to anyone-near a port on Mexico's Pacific coast. A young man who loves diving finds a shark tooth in the water. The tooth intrigues the young man, and he begins to look for information about it. Could sharks reappear in Mexico's ports? Will people's lives be endangered? 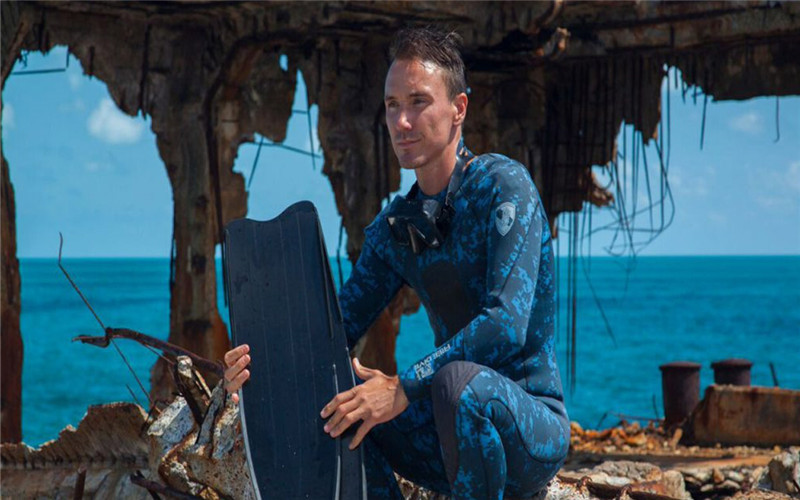 Rob Stewart directed this documentary film aimed at protecting the shark species. The movie was released in 2018 and honestly shows the plight of the shark, which should be the dominant animal in the ocean and is now endangered because of human activities, especially the shark fishing industry. The industry is often on the edge of national laws, and behind it is massive corruption. Stewart has followed the shark fishing industry, provoking reflection from viewers and indirectly contributing to changes in regulations in several countries and creating civilian shark conservation groups.

You may wonder why this documentary-like movie appears on the list of shark movies. Well, think about it. Those scary and fierce animals in the ocean are now on the edge of extinction because of overfishing. Our environment is the price we are paying for satisfying our little needs, but many of us still ignore this simple fact. Isn’t this scary? By watching this movie, I hope more and more people will be aware of the dire situation faced by sharks and begin to do something about it. 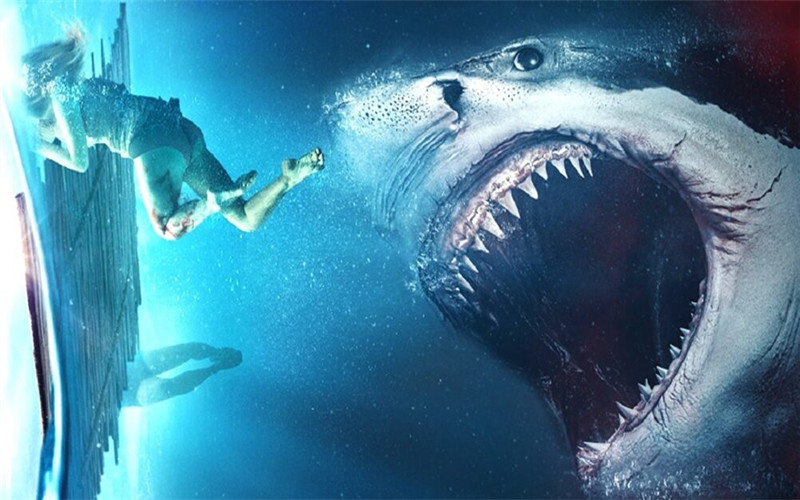 This is one of the best shark movies in 2022. Another story is about holidaymakers meeting sharks and combating the terrible conditions. Directed by Lê V?n Ki?t, the movie has roles played by Alicia Silverstone, James Tupper, Deirdre O'Connell, Danny Chung and Jennifer Mudge.

A couple on a romantic holiday find themselves stranded at sea when a storm sweeps through their sea villa. To survive, they are forced to battle the harsh conditions while sharks are hiding below them. 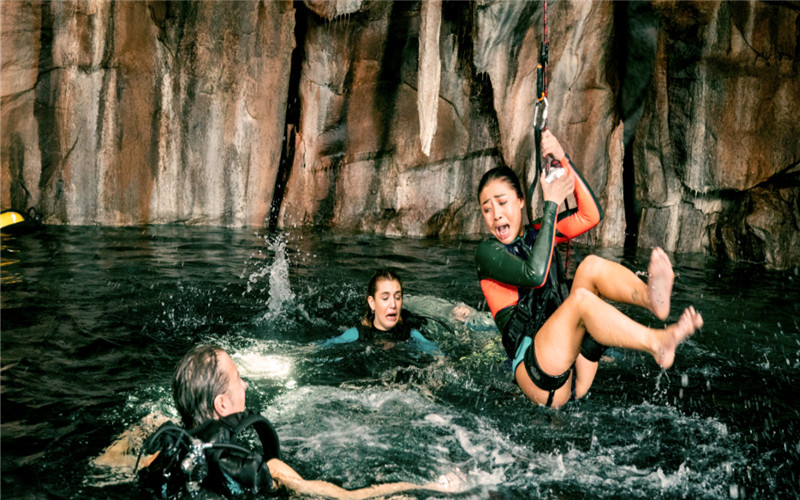 The movie follows the diving adventures of four teenage girls Sophie Nelisse, Corinne Foxx, Brianne Tju and Sistine Stallone. They explore a submerged Mayan city. Their excitement turns to horror when they go inside and discover that the sinking ruins are the hunting grounds of a deadly great white shark. As their oxygen supply dwindles, they must find their way out of the underwater caves and eerie tunnels. 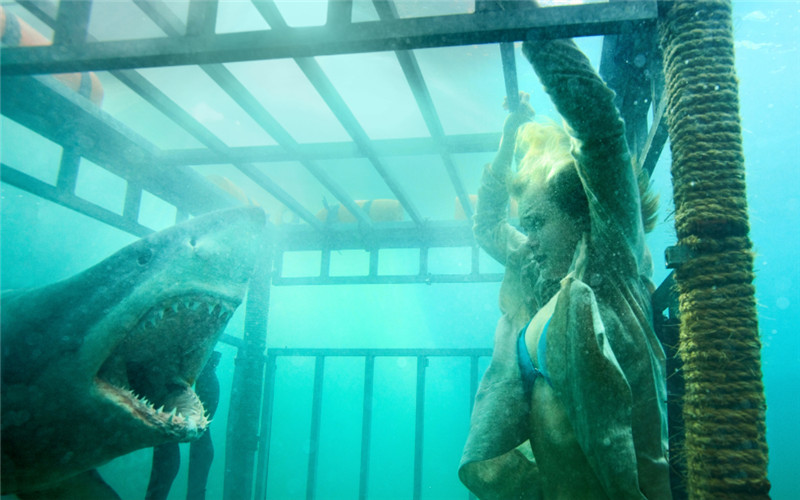 To celebrate the end of the exam, Nick, Gorden, Beth, Merrick, Maya and other students from the University of Touraine go to their classmate Sara's hometown Colosby Lake for vacation. The beautiful and pleasant scenery and the host's hospitality make the trip full of joy and excitement. But their happy time does not last long. Merrick, a sportsman, lost one of his arms when he was attacked by an unknown creature while surfing in a powerboat. The accident seems to presage their fate. No one would have guessed that a man-eating shark in the calm water is eyeing the young men and women.

Growing up in Kauai, Hawaii, Bethany Hamilton is a natural surfing genius who has shown her talent for surfing since she was a child. Along with her best friend Elana, she competes in national surfing contests and earns impressive results. But one morning when she was 13, a 14-foot shark attacked her while she was surfing. In an instant, her life and her future are washed away. When everyone is looking for another job for her, she decides to use her broken body to return to surfing. With the help of good friends Tom, Cheri and Sarah, she uses her incredible perseverance to get back on her feet, standing on her board and above the waves.

This is one of the shark movies on Netflix. This shark movie is only partly scary when the talented surfing girl is attacked by the shark and when her life is made miserable because of it. Audience will surely be deeply impressed by how strong, mentally and physically, the girl turns out to be.

In conclusion, these 11 shark movies are what we chose for you. I hope this list of shark movies will interest you in watching some of them.