Can’t wait to have a merry Christmas? How about watching some Christmas movies to recall the good memories you had on this special day? 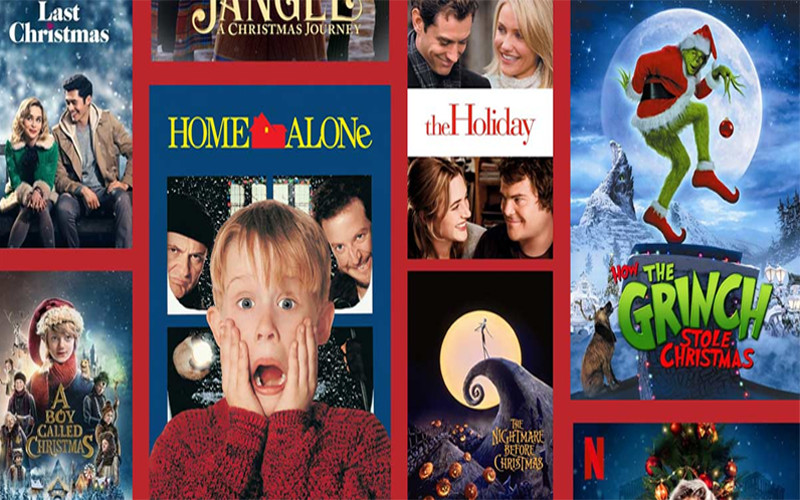 Everyone loves Christmas! You can not only have a family reunion but also receive many gifts from family or friends at Christmas. Also, there are countless Christmas movies that you can enjoy when you miss Christmas. From heartwarming movies to funny comedies, every Christmas movie is a new surprise to us. We know there are many 2022 Christmas movies; some are already on while others are still on the way. But how about taking a look back at some wonderful old Christmas movies? After all, classic is never outdated.

1.The Nightmare Before Christmas 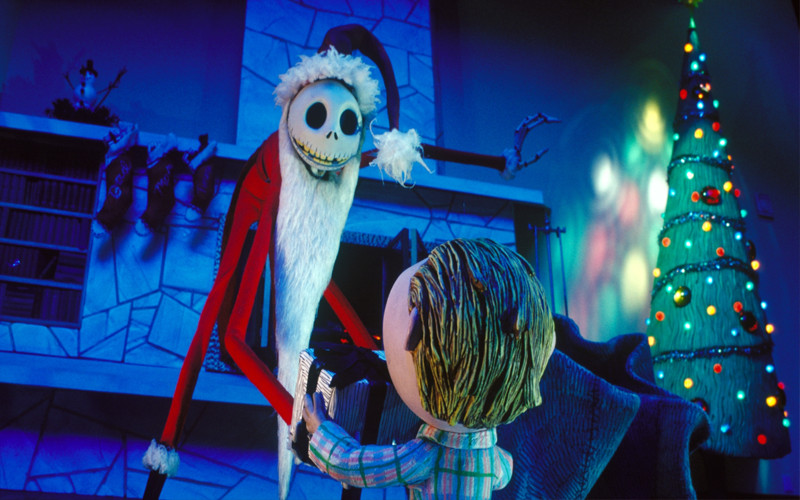 The story takes place in the Halloween Town, where all kinds of ghosts live. What they do is only prepare for Halloween every year. The Pumpkin King Jack, a tall and thin skeleton man, is respected by spirits, but no one knows the pain deep inside his heart. He is romantic, like a poet, and yearns for a life different from Halloween Town.

Jack accidentally finds some big trees carved with strange doors in the woods. He is attracted by one of the doors engraved with a Christmas tree. Curiosity drives him to open the magical door, and he suddenly falls into a white world covered by snow--the Christmas Town. The bright lights and colorful colors in the town surprises jack, and the happy atmosphere in the town fascinates Jack even more. To experience Christmas, he kidnaps Santa Claus and makes "gifts" according to Christmas rules. 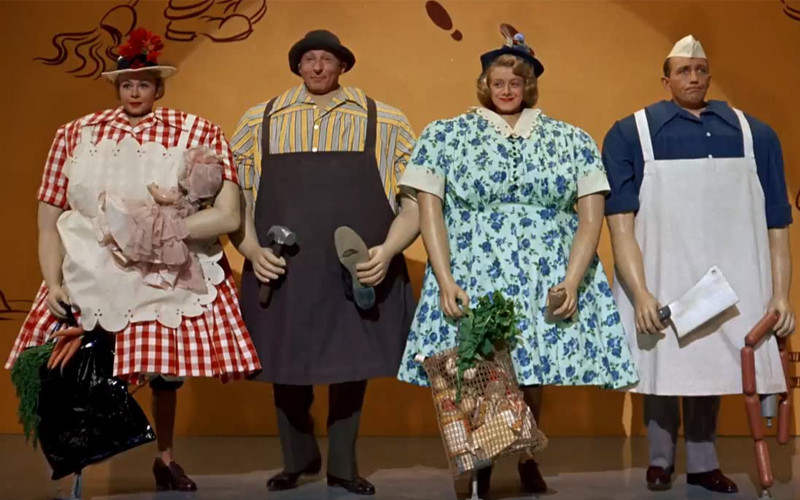 After the end of World War II, Bob Wallace and Phil Davis, who retired from the army, devoted themselves to the stage and became partners in dance performances. Later, Phil introduces Bob to two beautiful sisters, Betty Haynes and Judy Haynes, who are also performers.

Later, the two sisters are invited to perform in Vermont at Christmas, and the two boys follow them. Unexpectedly, the hotel owner who invited the two sisters happens to be Bob and Phil's former commander. During this Christmas season, when families and friends are reunited, this group of men and women who can sing and dance produce a lot of romances. 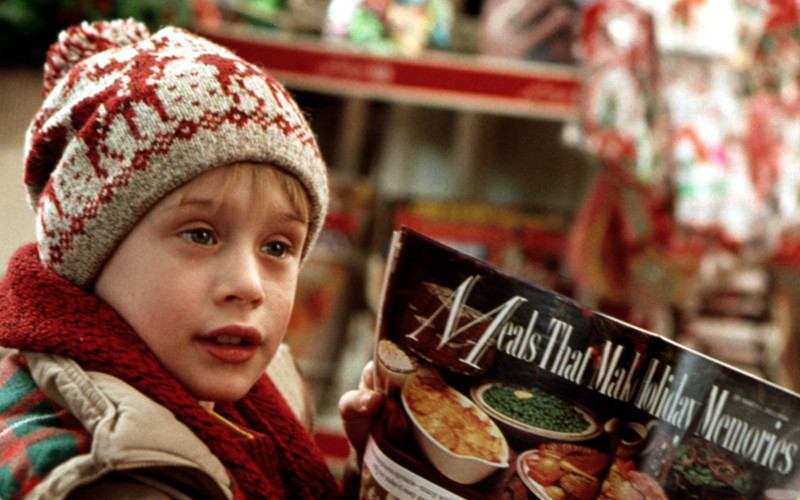 The annual Christmas is coming again. The McCallister family is going to spend Christmas in Paris. However, they mistakenly leave the youngest family member, Kevin, who is only 8 years old at home. His parents are worried, but by this time, they were out of town and could do nothing for a while. But Kevin is happy to be alone at home and can do everything he likes. So Kevin builds his home into a "playground".

While immersing himself in fun, Kevin has no idea that the danger is coming to him. Two thieves, who were recently released, find Kevin. When they sneak into the house, Kevin plays a "game" to trick two stupid thieves using his eye-catching devices. Can Kevin finally win the game? Let’s find out in this funny Christmas movie. 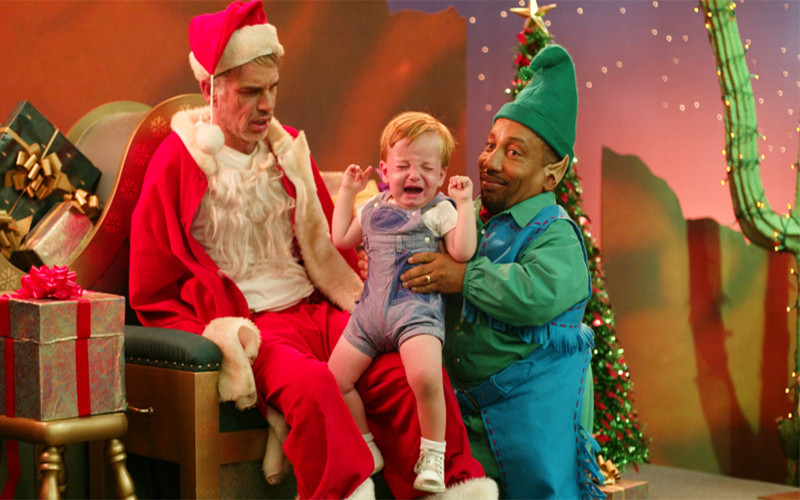 Willie and his partner Marcus are two thieves. At the same time, he gets a job as a Santa Claus in a department store and Marcus as an elf. They plan to rob shopping malls after everyone leaves and transfer their money to where they hide the stolen goods. Unfortunately, this year, their plan is not going well. They meet several strange people who stare at them all the time so they can’t start stealing.

First, the manager of the Department Store pesters them. A clever mall security guard finds their whereabouts suspicious, and soon a sexy Christmas girl also inadvertently interferes with their plan.

However, the biggest headache for Willie is an 8-year-old boy. This fat boy keeps pestering Willie. He wants to find out whether Willie is drunk or a villain. Willie can do nothing about him, so he has to tear off Santa's beard, showing his true face. Although Willie is angry that the fat boy disturbs his plan, the boy makes him realize the meaning of Christmas and give up his plan of stealing. 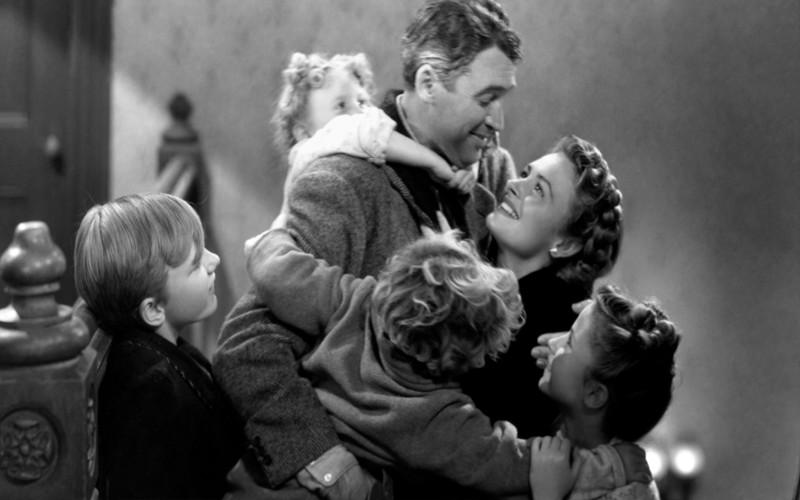 George is going to kill himself before Christmas. At this time, God sends an angel to save him and let him realize his mission -- to save those unfortunate people.

When George was a child, he had a disease in his left ear and worked as a helper in a drugstore in Bedford town. He was

very clever and valued by the boss. At the same time, he was also very popular with girls. When he grew up and was ready to go to college, his father unfortunately died, and the business of the George family was in poor condition. If the company is dissolved, many families in the town will also be in trouble. George persuades the board of directors to keep running the business, but the board of directors only agrees to keep the company if George runs it. Therefore, he has to give up his ideals and stay to inherit the family company.

However, because of the negligence of his uncle, George's company is on the brink of crisis. George decides to kill himself on Christmas Eve to obtain insurance compensation. Fortunately, an angel saves him, and the people who had received his favor also help him generously. Finally, on Christmas day, George regains his excellent life. 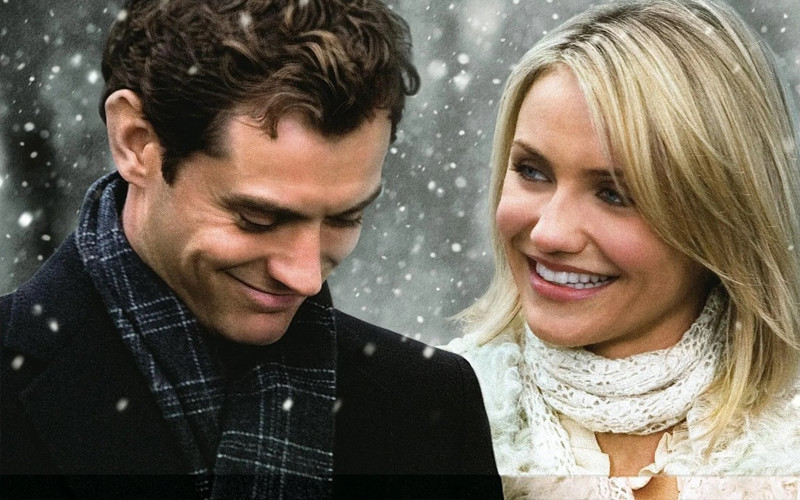 British woman Alice and American woman Amanda have just experienced a failed relationship and the betrayal of their boyfriend, so they decided to leave the sad place and have a quiet holiday in a new place on the occasion of Christmas to calm their depression.

By chance, the two women with the same experience meet on the Internet. They find that they have the same idea. So they make a bold and exciting decision for their vacation, that is, to exchange their homes for each other's vacation. Therefore, Alice embarks on the flight to the United States, and Amanda also comes to the British where Alice lives.

Can’t wait to know what will happen next? Watch this good Christmas movie now! 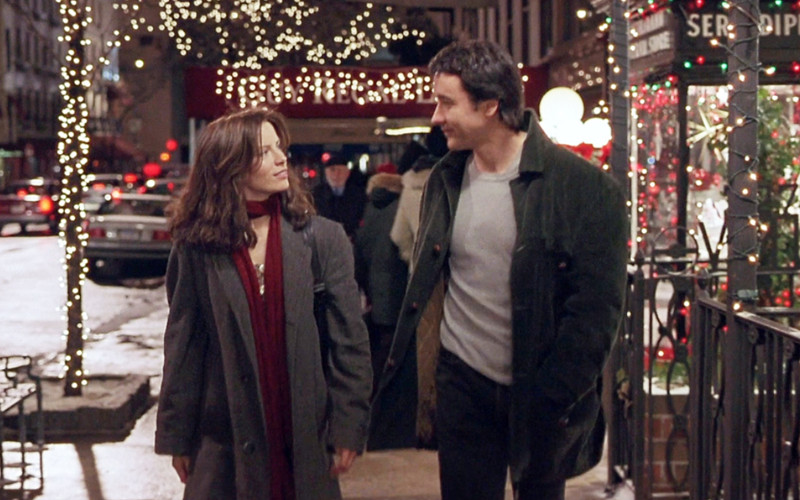 In the winter of 1990, people were shopping for Christmas gifts on a bustling and busy rest day. Jonathan Trager meets Sara Thomas when both try to buy the same pair of black cashmere gloves. Though both are relationships, these two strangers magically attract each other.

However, when dawn came, they had to make the next decision. When Jonathan proposed exchanging phone numbers with Sara, Sara decided to let fate determine if they should meet again. She left her number in an old book and sold the book to an old book stand. Sara said that the book would be sent to his hand if they were destined to meet again.

Ten years later, in New York, Jonathan becomes a producer, while Sara works as a psychotherapist in San Francisco. At this time, Jonathan, busy preparing for the wedding, recalls his short romance with Sara, so he decides to make his last effort to find the book with Sarah's phone number. Finally, after going through many difficulties, a miracle happens. 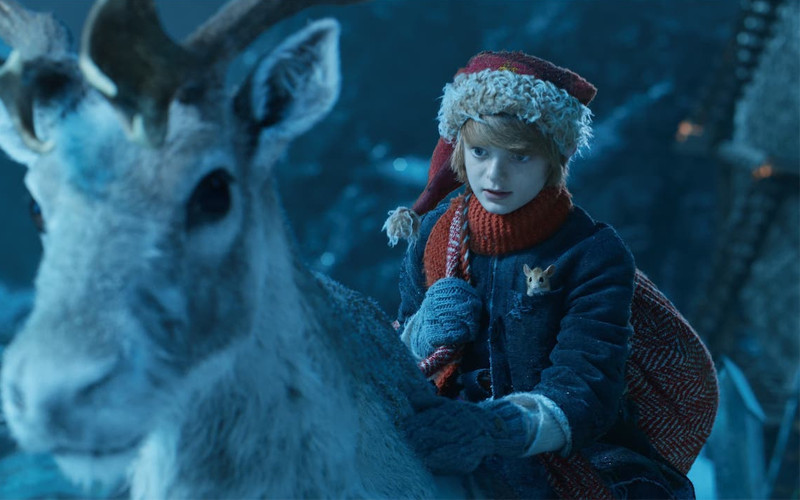 This Christmas movie is based on Matt Haig’s best-selling book,?A Boy Called Christmas. It tells the story of 11-year-old Nikolas, who lives with his father. Nikolas' best friend is a little mouse.

One day, his father receives a mysterious task and has to travel far away from home. His aunt comes home to take care of Nikolas. However, his aunt doesn’t like him and destroys the only toy left by Nicholas' mother. Nicholas is angry and sad. He runs away from home to find his father with the little mouse. He meets a reindeer on the road and makes a friend with it. He rides the reindeer and embarks on a magical journey.

9. How the Grinch Stole Christmas 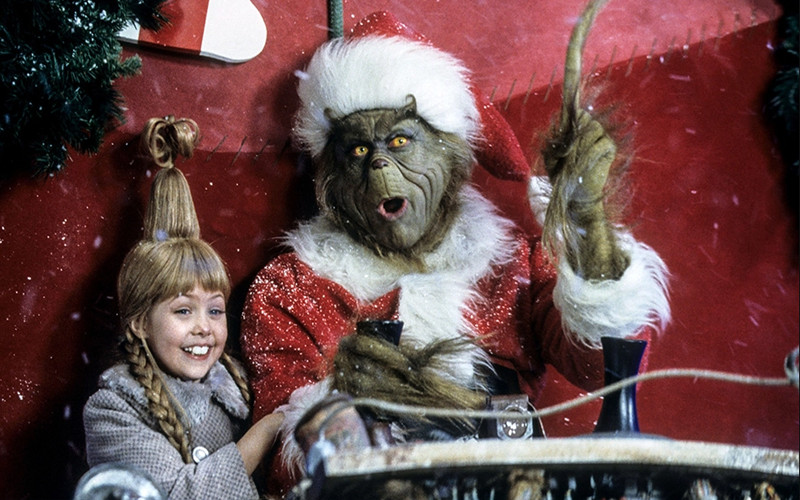 In most Christmas movies, the Arctic Circle is the hometown of Santa Claus, but in this one, it is also the home of the Grinch. Grinch is a narrow-minded recluse whose heart is only a quarter of an average person's. As a result, Grinch and his dog Max depend on each other and live in a cave.

One day, he finds that the town at the bottom of the valley is in a festive atmosphere. It turns out that the annual Christmas is coming, and every family is busy celebrating the festival. But Grinch hates this. He decides to make the people in the town as unhappy as him. He prepares to steal the gifts designed by everyone. He and Max disguise themselves as Santa Claus and reindeer, and walks around to steal all the villagers' Christmas gifts.

?Grinch thinks that stealing all Christmas gifts can destroy the Christmas atmosphere, but later, he finds that even without gifts, the villagers' happy songs still come from afar, and Christmas doesn’t stop without gifts or Christmas trees. At last, Grinch realizes that happiness is not built on materials. From then on, Grinch lives a happy life with the villagers. 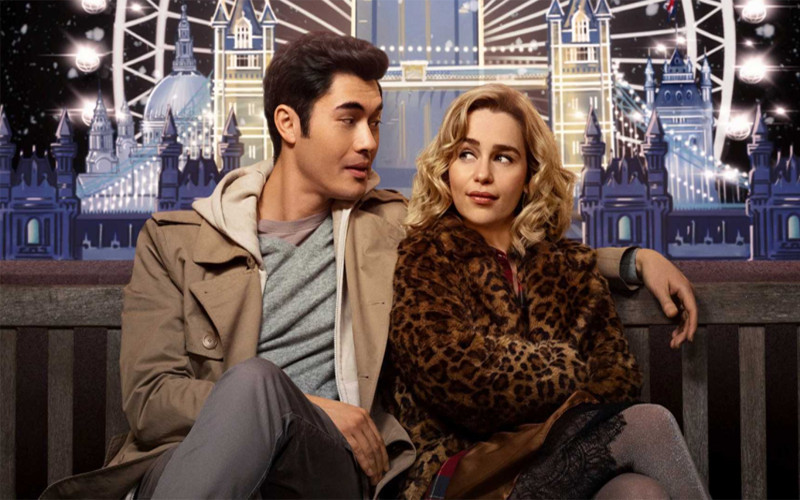 Love is a significant element in Christmas movies. We can learn how to love better from this movie.

Kate Andrich, a young aspiring singer, works a dead-end job as an elf at a year-round Christmas shop in Central London and bounces around between her friends’places because she can not afford her apartment. Her mother takes extreme care of her but insists on not going home.

One day, Tom Webster suddenly appears outside the Christmas shop and develops a complicated romantic relationship with Kate. The love story between them is the key to Kate's heart knot. However, what is in Pandora's box may not be the antidote to happiness. Finally, love saves Kate. She also learns to adjust how she shows her love for her parents. Through her work experience with her boss and in a street shelter, Kate puts down her resistance to the world and regains her positive attitude towards the world from the interaction between her family and friends.